Change of scene a bit from the last post.  This time I'm sat in my own room, on my own bed listening to (the slightly less prestigious) supermashbros.  It feels good to be back in Wellington to some extent, but the end of my trip was somewhat painful, having met so many good people in such a short space of time, the realisation that it was over and i was going back to 'normal' life was hard to take.

But enough of that, I should carry on from where I left off!

After the debacle that was my 'race' in Nelson I was very keen to hit the road and get some fun miles in.  So having had a big curry in the grounds of the church in Nelson (causing "curry induced comas", Owen Hughes) post race and a final big breakfast at Owen's parent's place we set off.  Owen, Andy and myself spun through the first 20km into town fairly easily (in reality that should be steadily or slowly, it still wasn't easy!), in town we met up with Vaughan and set off for the 90km to St Arnaud, making a first day total of 110km on the road.  The end of the ride was pretty rolling which saw us all run out of food/water at pretty much the same point.  I do have to admit to bonking first though, not much fun crawling up road hills in bottom gear when you would normally be bouncing up them.  The descents however gave us all a chance to perfect our speed tucks, with Owen and Vaughan pushing out the best top speeds as my bag worked pretty much as a tuck-limiter (I couldn't get down too low as I then couldn't lift my head to see because my helmet hit the 'rucksack') so my pure tour style, sat on the top tube tucks that I have recently learnt couldn't be used to their full extent.


When we finally made to to St. Arnaud we all knew where our priorities lay, so instead of going to Vaughan's bach we went to the general store and loaded up on pies, crisps, water and whatever else we fancied before grabbing some beers (Monteiths Radlers being the beer of choice for the trip, perfect for a Southerner like me, full strength shandy pretty much) before rolling on to the bach, where a beer or two was consumed along with crisps (with the pretence of restoring salts).  With the best intentions of heading on to the lake to swim and relax we all collapsed and slept for a good hour.

We did make it the lake however, and it was well worth it, so refreshing and relaxing.  Stunning setting too, not worth really talking about it more, suffice to say that bib shorts where a good idea (diving in without was just asking for trouble).
Vaughan's bach was real luxury, we all got our own rooms and beds (I even got 2!), so we all woke refreshed and ready to start the real riding (off road!) on the Tuesday morning.  Vaughan planned to leave us that day and head up to the top of the Rainbow ski field before returning to the bach to refuel and head onwards to Blenheim. Before riding back to Nelson via the Mongatapu saddle, in a similar route to that taken by Andy and Owen to get from Picton to Nelson.  As such Vaughan was riding very light, just carrying the essentials (which transpired to include a beer for the top of the ski field), whereas I was really feeling it that morning, riding at the back of the group along the rainbow road.

The Rainbow Road starts off as a tar sealed road before becoming a gravel road which you have to pay to use, it runs from Rainbow station through Molesworth and onto St. James.  The route we had planned was to go along the Rainbow Road until we got to Lake Tennyson and hang a right onto the new St. James cycleway before overnighting at the Lake Guyon hut.  The second off road day would see us ride out from Lake Guyon on the St. James cycleway which would take us to the St. James Homestead and back onto the end of the Rainbow Road before hopping over Jack's Pass and into Hanmer.

Early on on the gravel section we had a stop to check out a bridge over the river Wairau which was really beautiful.  We persuaded Vaughan to come with us to this point before he left us.  The swing bridge has a one person limit, but is definitely a good one, not one of these 2 wire ones.
From here on in the views just started getting better, as such, relying on that old adage 'a picture tells a thousand words' (or there abouts), here are a few from my camera.

We arrived to Lake Guyon after a long hard day in the saddle, hoping that we were the only ones wanting to use the 4-birth hut.  Thankfully we were, however we soon found another problem; sandflies.  Andy tried to combat them by covering every inch of skin in clothing, I tried to copy, but failed, so resorted to riding around the lake a little and taking some photos, including my first 'man of the mountain' photo, which any geologist/geophysicist should have.  I think it rivals any of them, but it won't be going into the public domain without express intent from that public, no one should have to see my (awesome) tanlines.

We got out fire going (or rather Andy and Owen got the fire going as I wondered around slightly bewildered by the whole experience and not wanting to cock it up) and got some water on for out freeze dried meal.  These seemed to be our best option in St. Arnaud and turned out ok, but my lamb chunks ended up being quite crunchy (probably due to a lack of patience on my part), the thought of these the next morning turned my stomach.

The decision taken that night was that we would pack up before it got light and head out to try and get away from the sandflies before having breakfast somewhere down the track.  As such it was a steady, very cold start.  All of us had toe and finger pain from the cold, with the sun taking a long time to get across the valley to us.
After what seemed like an age of riding in the shadows we finally hit sun and with it a good fun, fast descent which had my front tyre buzzing my sleeping bag (seen in the photo above in a pack liner attached by bungees; I didn't really allow for the fork to compress, but I got away with it thankfully.  I did have to ride on the back wheel quite a lot though).

I think I'm going to leave it there for today, I will pick up on that thread soon and take you the rest of the way to Hanmer and maybe a little beyond.  Once again I will leave with a photo, from the lens of Owen Hughes; the end of the St. James cycleway. 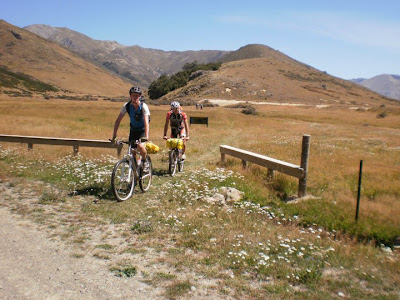 Posted by Calum Chamberlain at 7:30 PM