NZ National Round 2-Napier; starting the season on the wrong foot

Starting with the end, I managed to claw my way through this UCI cat 2 race in Napier to finish a fairly poor (but hard earned) 12th place.  Although I had no real expectations going into the race as I haven't raced these guys over this kind of distance before, I was still hoping to be in the top 10 rather than just outside as I was.  I'll explain a bit what happened in this wee post and probably ramble about a bit too.  It will be less of a VFTP (View From The Pack) and more of a VFTB (View From The Back)...

I had managed to blag a lift up to Napier with the formidable Stu Houltham of National Champs, World Cups and World Champs fame.  It was definitely a preferably option to taking the bus up there, getting to chat away about Stu's racing, studies (currently doing his Masters thesis in Exercise Science, for which he is studying the daily protein requirements for female endurance athletes) and general bits and pieces.  Also thanks to my parents I had a place to stay with some of their old friends, Leigh and Mike.  A massive thanks to them for that and for all they did for me.

To give a quick overview of the course, it felt a lot like home (in the summer mind, the dust was killer) in that there was little ascent or technical stuff.  It was going to be a full on physical battle with only one sustained climb in the 6.1km lap.  From the start the course climbed gently for the first 200 ish metres before dropping into the first piece of singletrack which spat the riders out at the base of the aforementioned climb around the 5km to go mark and the site of the 2 way tech zone.  For me this climb was a bottom gear (34T chainring, 11-32T cassette; time to mtfu) job at the start as it was pretty steep and dusty.  However it shallowed out after about 400m into a nice steady climb to the top of the next section of singletrack.  From here on the course was mostly singletrack with little opportunity to pass or drink, so the climb was going to be key.

The course then dropped away sharply into the singletrack before contouring round the hill with some little pinches out of wee valleys before entering the main descent of the lap.  This was a pretty nice descent, which could be flowed through with some skill through the 4 or 5 switchbacks it contained (2 with cheeky inside lines that were significantly faster).  From here on it was kind of a blur of singletrack mostly rolling along the bottom of the valley with only one significant climb for about 200m before the 2km to go mark.

So, getting to the race itself.  I was gridded favourably at 10th (out of about 20, the results aren't up yet, I may be overestimating!) right on Stu's wheel.  From the gun I held my position in around 10th and managed to stay on the outside trying not to get boxed in.  However after about 150m disaster struck.  Having left my old XTR cassette on my race wheels (and having tested it, but not under racing power) my chain jumped out of top gear and that was me on the deck straight away.  Thankfully no one hit me, but I laid there until everyone had passed before hopping up, straightening the bays and getting up and going.  This cost me about 2mins (had to get the tool out and just needed to calm down a bit) so from here it was a case of chasing both the elite and junior field.

I worked my arse off for the whole of the first lap and failed miserably at drinking, getting too caught up in nailng myself.  By the start of the 2nd lap I was up to ~16th I think, having passed a few juniors and other riders.  From here it kind of goes into a bit of a blur of passing and laps.  I did have to stop on the 2nd lap before the climb to change my front wheel having realised that I had buckled it in the crash which cost me a place.  However that was swiftly rectified, taking this person and a further rider on the climb.  After this though it felt like I was in no mans land and by the 5th time up the climb my legs were starting to feel like they would be cramping any time soon.  I pushed as hard as I could on the 5th lap, but as I came through the start finish for the final lap I could see that the person in front had a large gap on me (I couldn't see them!) so I made the decision to play it safe, not risk cramping and just defend my position in 13th.  Turns out this was wise as I passed someone on the climb who was obviously suffering with cramp allowing me to jump up to 12th.

So 12th was the result and my result was 12th...  Not the best, but a ride that I feel relatively happy with considering the lack of speed  in the legs and the somewhat unfortunate circumstances.  I did the best I could and left it all on the track.  I even got $60 for my efforts! Luxury; I can definitely cope with this winning money lark.

All that's left now is to see if I can get that wheel true and recover and train in time for Nelson.  Who knows, I might even try and do some intervals! 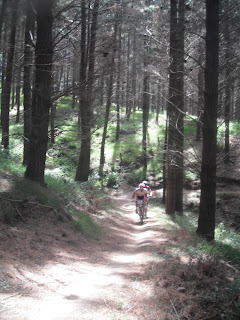 Mikey Northcott pre-riding one of the wee valleys
Posted by Calum Chamberlain at 6:27 PM